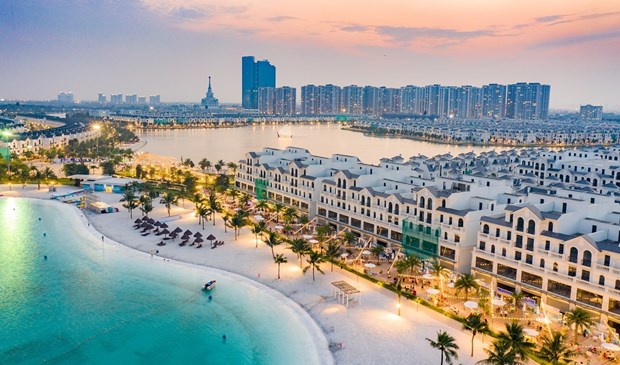 Urban area of ​​Vinhomes Ocean Park. (Source: Wine Group)
Hanoi (VNA)- In the first nine months of this year, the Vietnamese real estate sector attracted more than 3.5 billion dollars under the concept of foreign direct investment (IDE), for a year-over-year increase of 51.4%.

According to statistics from the Foreign Investment Department of the Ministry of Planning and Investment, as of September 20, foreign companies have invested $18.7 billion in 18 out of 21 economic sectors.

It should be noted that the real estate sector ranks second on the list, capturing $3.5 billion, which is equivalent to 18.7% of FDI.

Ho Chi Minh City is the city that received the largest foreign direct investment, with a capital of 2.96 billion dollars, which represents 15.8%, followed by Binh Duong (2.7 billion) and Bac Ninh (1.78 billion).

Singapore becomes the largest source of foreign investment in
Vietnam, with $4.75 billion; while South Korea is in second place with 3.8 billion and Japan with 1.9 billion. /.